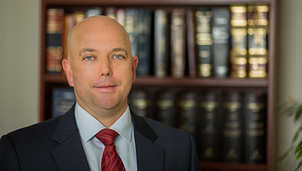 James W. Sprouse, Jr. (Jimmy) is a founding member of the law firm of Sprouse Law Firm PLLC and has been representing creditors since 1999, devoting the majority of his practice to the fields of commercial collections and construction law.  Mr. Sprouse has extensive experience protecting the rights of construction materials and equipment suppliers, which involves filing and litigating lien claims and bond claims. Mr. Sprouse also represents creditors in bankruptcy proceedings to recover collateral, pursue claims and defend against preference actions.

Mr. Sprouse received his undergraduate degree in 1991 from North Georgia College, which is now the University of North Georgia. After accepting a commission as an Artillery Officer in the United States Army, Mr. Sprouse served on active duty from 1991 through 1995 at duty stations in the Republic of Korea and at Fort Bragg, North Carolina. After his military service, Mr. Sprouse attended law school at the University of North Carolina at Chapel Hill and received his law degree in 1999.

Mr. Sprouse is admitted to practice in the North Carolina courts and the United States District Courts and Bankruptcy Courts for the Eastern, Middle and Western Districts of North Carolina. Mr. Sprouse devotes approximately 90% of his practice to creditors’ rights-related matters.